Wrangler® and Yellowstone, Cable’s #1 Hit, Band Together to Deliver An Authentic Western Look for Fans 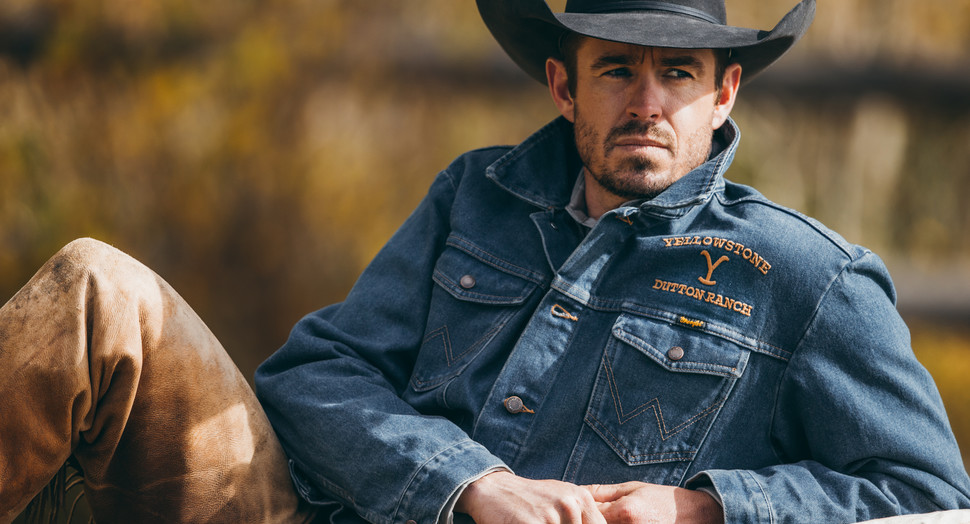 November 15, 2021 — Greensboro, NC — Global denim icon Wrangler®, and ViacomCBS Consumer Products, today announced its latest pop culture collaboration with Yellowstone, cable’s #1 hit from Paramount Network and 101 Studios. The official licensed Wrangler x Yellowstone Collection came to fruition after much of the denim apparel was seen organically on the show’s beloved characters through the first three seasons and continues to be worn in Season Four which premiered on Sunday, November 7 to record ratings. The two iconic brands of the West banded together to deliver genuine articles of apparel for those who live and aspire to the western lifestyle.

“Wrangler will always be the brand of authenticity for western fashion. Collaborating with a TV series like Yellowstone brings the lifestyle we’ve embodied for decades into the spotlight and allows us to reach a new audience showing them what it means to evoke the cowboy spirit,” said Holly Wheeler, vice president of global brand marketing at Wrangler. “We’re thrilled to be able to add a layer of authenticity to fans’ closets as the western lifestyle continues to surge in popularity in mainstream culture and fashion.”

The Wrangler x Yellowstone Collection includes an assortment of denim and twill work shirts and jackets featuring screen printed and lasered variations of the Dutton Ranch’s “Y” brand, along with several dual-gender hoodies and t-shirts that feature graphics from the show. The collection nods to the core ethos of Yellowstone - the preservation of the western way of life and the grit and determination it takes to live it - aligning with Wrangler’s nearly 75-year heritage in rodeo, farming and ranching.

“Both Wrangler and Yellowstone are interwoven with the lore and legend of the West” said Jose Castro, senior vice president, licensing collaborations & specialty retail, ViacomCBS Consumer Products. “We’re thrilled to work together to bring this collection to fans so they can express the spirit of the American West through these styles.”

Throughout the past three seasons, the iconic Wrangler patch has been seen on many characters, including Kayce Dutton who is often seen wearing the Retro® Skinny Jean with “W” stitching paired with hits boots.

“I love being able to partner with Wrangler as a western heritage brand that not only shows such craftsmanship, quality, and design, but is a perfect fit for the ranch life we’re working to portray,” says Yellowstone costume designer Johnetta Boone. “Wrangler caters to everyone, and while each character has their own look and style, I could effortlessly find pieces that worked for the entire Dutton family and full cast. I even had several actors who wanted to emulate their own personal pieces of clothing to pair with Wrangler, so I can tell you that I truly see the brand continuing on with these characters in future seasons.”

The Wrangler x Yellowstone Collection will be available starting today, November 15, on Wrangler.com. Prices range from $27.99 to $79.99. To keep up with the collection, follow @Wrangler and #WranglerxYellowstone on social media.

Wrangler®, of Kontoor Brands (NYSE: KTB), has been an icon in authentic American style for more than 70 years. With a rich legacy rooted in the Western lifestyle, Wrangler is committed to offering superior quality and timeless design. Its collections for men, women, and children look and feel great, inspiring all those who wear them to be strong and ready for everyday life. Wrangler is available in retail stores worldwide, including flagship stores in Denver and Dallas, department stores, mass-market retailers, specialty shops, top western outfitters, and online. For more information, visit Wrangler.com.