Saving Water in the Desert

TORREON, Mexico — The sand and dust swirling in the hot desert air makes Torreon’s sunsets remarkably beautiful. The gathering dust filters the final rays of dying sunlight, turning the horizon into a glowing amber haze that backlights the mountains and accentuates the starless and darkening blue sky above.

It’s a lovely sendoff, but a false farewell. The dust cloud remains in the air long after the sun has tucked itself in, tickling the sinus and blanketing the city in black gritty soot. Every vehicle in town looks like it just crossed the finish line at the Baja 1000.

Torreon likes to call itself “the city that defeated the desert,” but the desert is still putting up a good fight. There’s so little rainfall here that a “Torreon rain shower” is a euphemism for a dust storm. Even the local beer is called Terregal, Spanish for “dust cloud.”

Needless to say, water preservation in Torreon isn’t just a good idea; it’s imperative. So when Wrangler de Mexico, a manufacturing division of Kontoor Brands, endeavored to recycle 25% of its wastewater two decades ago, it didn’t strike anyone as a particularly radical idea. 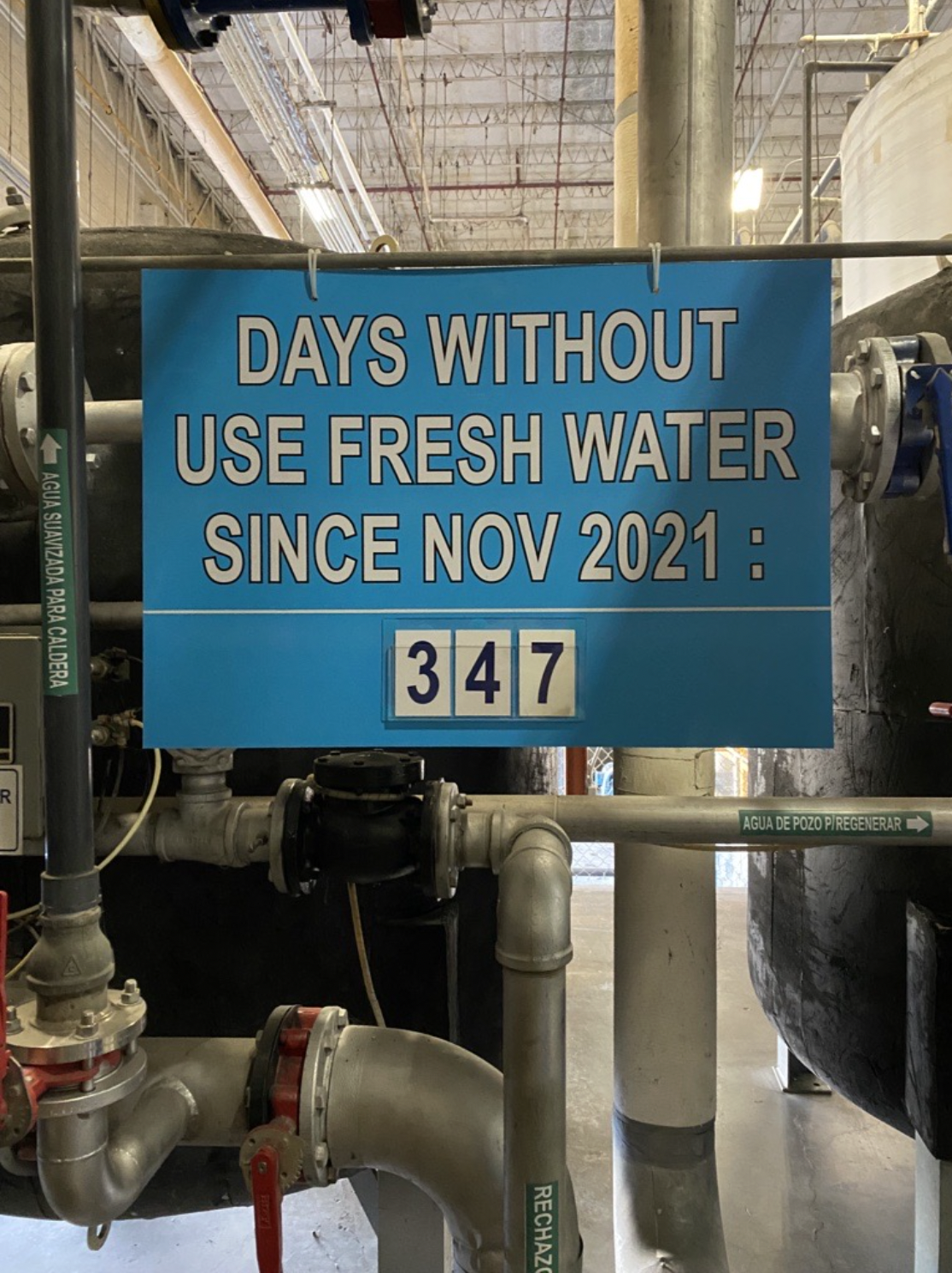 But as the project grew in scale, it took on a life of its own and became much more ambitious, eventually reaching the milestone goal last year of zero fresh water used in its laundry process. This month, it became official: Kontoor’s Torreon complex’s laundry water use was externally verified by Bureau Veritas, a world leader in testing, inspection and certification services.

Now, instead of being a serious drain on Torreon’s dwindling water resources, Kontoor is using wells on its property to provide fresh water to the municipal government.

Kontoor’s wastewater plant “deserves to be admired and well recognized for the great impact it has on saving water,” says Aurora Solorzano, a Higg Index verifier for Bureau Veritas. “I have visited 70 to 80 textile [facilities], and most of them install treatment systems only to comply with the environmental requirements of each area, and to discharge treated wastewater in municipal drains without thinking about a reuse project,” Solorzano says.

Kontoor’s facility is different, she insists. It’s the first she’s seen that “bets on the reuse of industrial wastewater.”

That distinction is a great source of pride for the 3,000 Kontoor employees in Torreón, especially the team of scientists and technicians who work tirelessly to keep the wastewater plant humming. 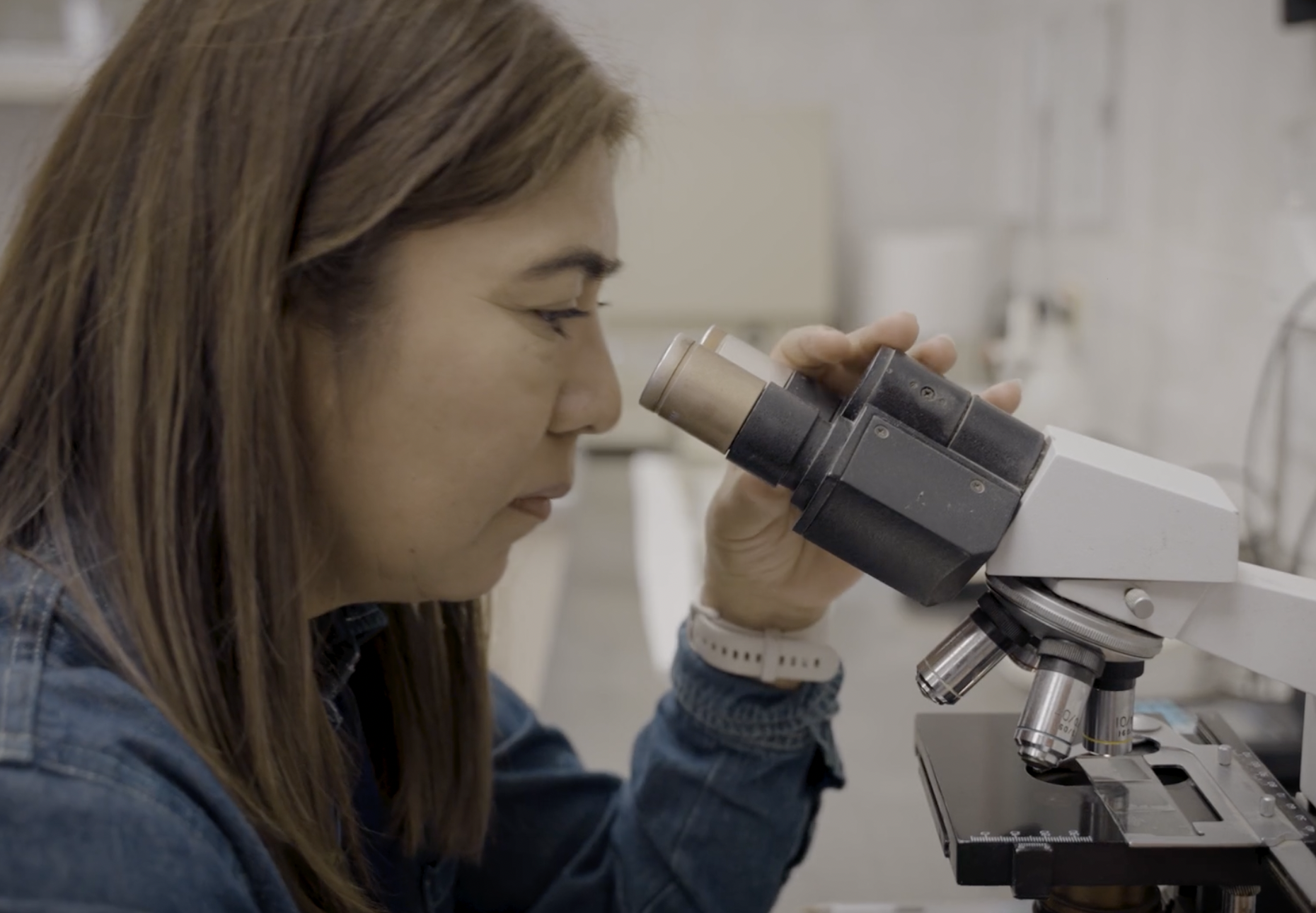 “I feel really proud to be a part of this team. It hasn’t been easy, honestly. But everyone on our team does their part every day so that we can meet our goal,” says Rosalba Ramos, SBR specialist for Kontoor in Torreon. “The world depends on what we do to care for the future — our children and the generations that follow. We want them to live better, to have a better future.”

According to the plant's audited registry, Kontoor’s Torreon complex has saved more than 302 million liters of fresh water in the past year alone. That’s a saving equivalent to nearly half the drinking water needs of the city’s 800,000 inhabitants, who face frequent water rationing measures during prolonged periods of drought.

Nobody takes as much pride in the achievement as Arturo Nuñez, Kontoor’s wet process engineer. The water recycling plant is Nuñez’s brainchild, and the zero-fresh water milestone is thanks largely to his vision, creativity, persistence and constant experimentation.

“I feel really proud about my team at the wastewater plant. I tell them: ‘This is for your children because we are saving water for them. This is like a legacy for our community’,” Nuñez says. “Kontoor gave me this opportunity. The company is encouraging this mission, and our commitment to the environment. That is huge. They gave us the opportunity to grow.”

‘It’s a lot of chemistry’

When Nuñez studied chemistry in university, he thought he would go into the medical research field. He never expected that he would someday work in the denim industry. But after working as a contractor to help Wrangler build its first water treatment plant and laboratory in Torreon 24 years ago, Nuñez got hired to manage the technology he had installed.

Through careful experimentation with bacteria and “lots of chemistry,” Nuñez was able to increase water recycling efficiency to 50%. That’s when he got the idea of implementing reverse osmosis to move the needle even further.

“Reverse osmosis is not new technology, but I couldn’t find any case where it had been done successfully using recycled water in this process,” Nuñez explains. “Normally we hear about reverse osmosis using ocean water to produce clean water, but not recycled water from the apparel industry.” 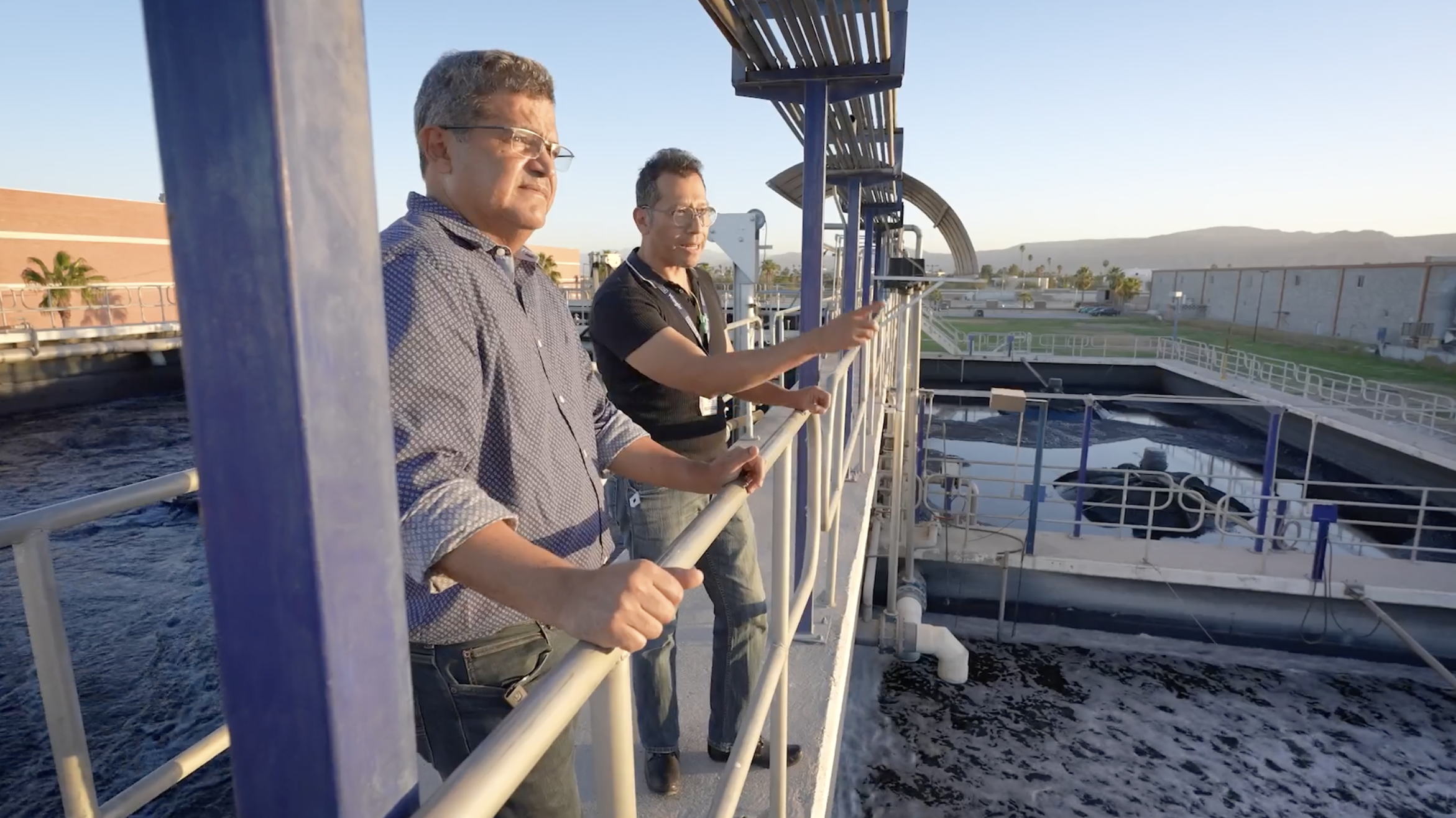 After some trial and error, Nuñez and his team were able to make the reverse osmosis technology work, increasing the efficiency of the water recycling to 85%. But water loss and discharge in the laundry process made the goal of 100% recycled water seem unattainable. For several years, the Torreon team still relied on fresh water from wells to top off the recycled water supply before initiating a new laundry cycle.

Then Nuñez got the idea of purchasing treated greywater from the government, filtering it through reverse osmosis, and using that to top off Kontoor’s own supply of treated wastewater, eliminating the use of wells and reaching 100% recycled water in the laundry process.

But reaching the milestone was only half the battle. Maintaining the goal of zero fresh water requires constant calculations and adjustments to adequately clean the government-provided wastewater, which is inconsistent in its quality and impurities.

“Sometimes the greywater we buy from the government comes in really clean, and other times it comes with a lot of suspended solids,” Nuñez says. “It’s a problem we have to face every day, examining the quality of the water. Everything is chemistry.”

Torreon’s recycling efforts are part of Kontoor’s greater commitment to water mitigation and environmental conservation around the world. From promoting the growth and use of sustainable fibers to the revolutionary Indigood® program, which uses foam dye and other water-saving technologies to reduce water use by more than 90% in the Indigo dyeing process, Kontoor’s sustainability practices are helping to reshape the industry.

Of the cotton Kontoor uses in its denim, more than half comes from the U.S., where two-thirds of the growers use some form of conservation tillage, 64% of cotton grown relies solely on rainfall, and only 5% requires full irrigation, according to Cotton Inc. The company is also committed to advancing climate-smart agricultural practices like Regenerative farming in cotton, looking towards the large cotton-growing countries like India and collaborating with local partners to raise awareness about Regenerative cotton and introduce that cotton into Kontoor’s products and value chain.

“We're trying to make this common, normal everyday practice of doing the right thing,” says Jeff Frye, Kontoor’s Vice President of Sustainability, Innovation, Product Development, and Procurement. ”We know that the more we can advance doing the right thing, the more it's going to help the industry. Because sustainable cotton is about more than just water conservation, it’s also about carbon mitigation.”

Looking ahead in Mexico 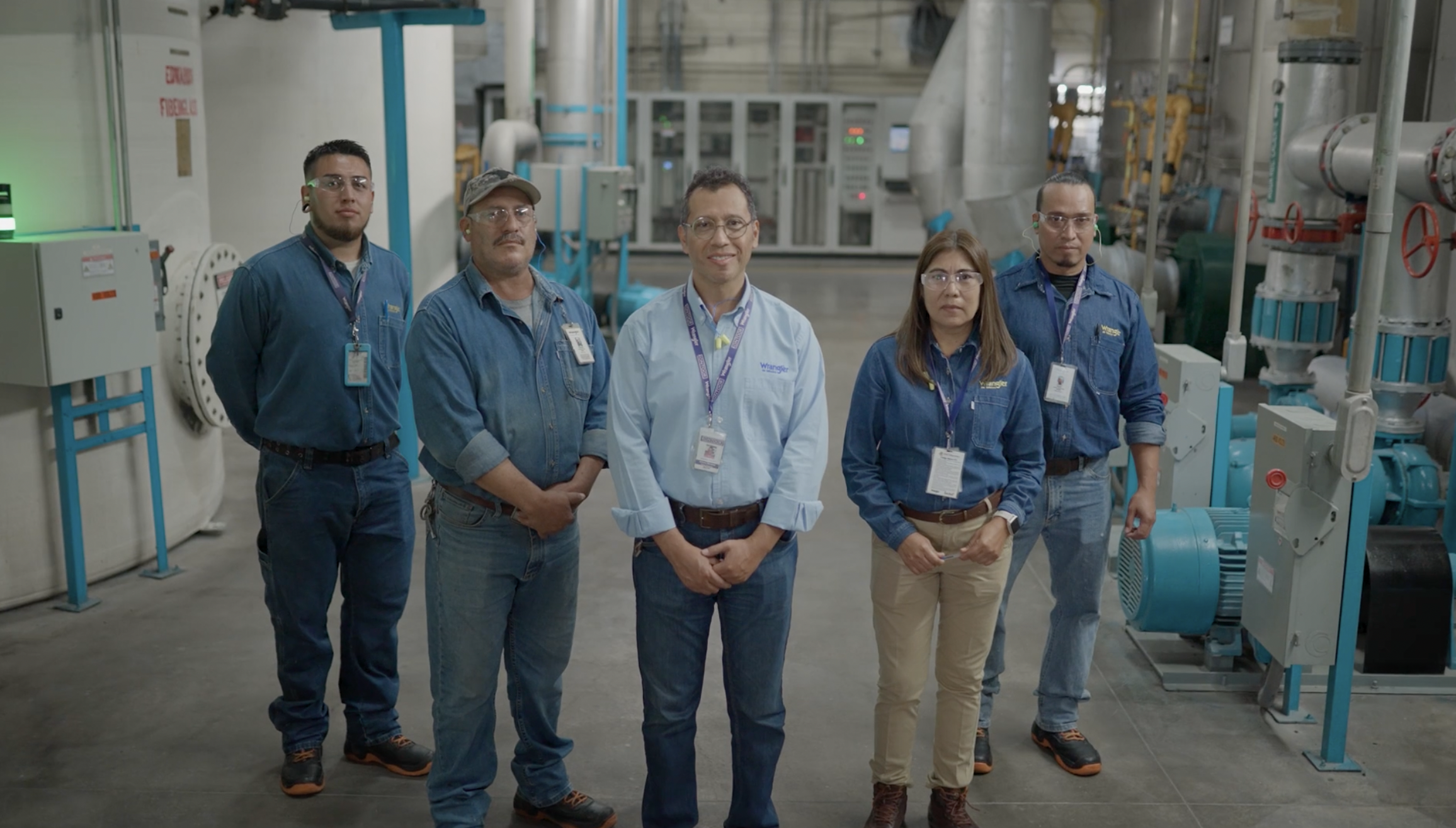 Back in Mexico, the success of Torreon’s water recycling operation has encouraged Kontoor’s Yucatán complex to build a similar facility, which is now recycling 27% of its water from the laundry complex. Scaling up that operation has proven to be more challenging for a number of reasons, including a different mineral composition that makes the water much more difficult to recycle.

Nuñez, however, is already working on a solution: a next-gen Mexican molecular modification technology known by the abbreviation MOMO. If the technology is successfully adapted to the Torreon plant, it would allow Kontoor to dramatically reduce its energy costs and use of water, Nuñez predicts. Plus, he says, it would be easy to implement at Kontoor’s Yucatán complex in a way that current technology isn’t.

“I’m really excited to see what we do next,” Nuñez says.